Comedy simulation game published by tinyBuild and developed by Casey Donnellan Games Kill It With Fire, coming to mobile devices.

The game, which was previously released for PC, was announced not only for iOS and Android, but also for PlayStation 4, Xbox One and Switch. Game Free on March 4th It will somehow be published on the App Store and Google Play. The video of the game, the promotional article and the store pages you can find it below.

The Pillar, the escape-the-room-style puzzle game released for iOS 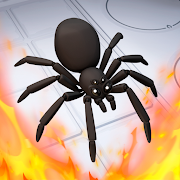 Kill It With Fire

Man’s oldest and deadly enemy is spiders. It’s time to fight back as a licensed Kill It With Fire exterminator! Gather your arsenal and travel through time, space and the suburbs in pursuit of this eight-legged threat, and you don’t have to go in that order.

To defeat the spiders, you have to use their only weakness: FIRE. Or bullets. Or crushing with explosives, ninja stars, stuff … Actually almost anything. However, this does not mean everything will be easy. First you need to find the spiders. Use state-of-the-art arthropod tracking technology to locate your prey in hundreds of hiding places. Then set everything on fire and when it’s done, smash the spider with the pan. This is the only way to get definitive results.