For a while new Hyundai Kona N The Korean manufacturer, who shared the clue images, removed the cover on the performance model this time. ‘Hot SUVThe new Kona N, described as’, is only available for the body design for now.

New Hyunda Kona NIn addition to high performance, it also brings the sportive touches of the N unit of the Korean company. The N badge stands out on the black louver with a dominated honeycomb pattern on the front. The bumper section also looks more sporty with larger air ducts and black fins, and the red stripes on the front lip, sill and rear diffuser draw attention.

The new Hyundai Kona N, which draws attention with its dark-colored large wheels, black columns that create contrast with the body color, roof and side mirror covers, also features a double-wing spoiler with triangular brake light, glossy black diffuser and large exhaust outlets. It is also possible to see honeycomb patterns on the front grille on the rear bumper.

Technical details of the new Hyundai Kona N are not yet clear, but 2.0 litre turbo gasoline unit and 8-speed dual-clutch transmission We know it will come with the combination. This engine, which is also in the Veloster N, another performance model of the company, produces 275 horsepower and 353 Nm of torque in the vehicle in question. According to Hyundai’s statement, in the new Kona N launch control We will also see high performance driving features such as (launch control).

It is not yet clear when the performance model will be introduced, but with the appearance of the body design, we can think that the world premiere is not far away. We will continue to convey information about the new Kona N to you, our valuable readers, as it becomes available. 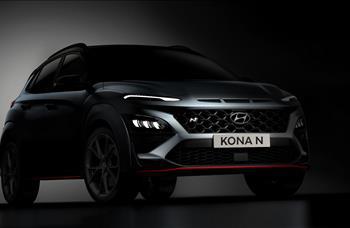