See Also. “Dungeon of the Endless: Apogee released for mobile”

The gameplay video of Bridge Constructor: The Walking Dead, which will also be released for mobile devices, has been released

The Walking Dead: Survivors’da with the character we know from the comicr to be found and play a strategy based survival game it will be. As in other games of this genre, to keep your characters alive and to expand their territory You will need to build various structures. Various for not only structures but also your characters you will be able to make upgrades.

The characters to be found in the game, known from comics and series Rick, Maya, Vayne, Glenn, Dwight and it will consist of many more characters. The main goal of the game creating a safe zone by building various structures while exploring the surrounding area. In the game for the moment Turkish language support does not exist, but in the future more language support announced that it will be added.

The game is currently in some regions It has been opened for pre-registration. In our country, only Available for Android case. It will be available for iOS in the near future. Of the game full version release if The summer months of 2021 as announced. You can check out the site of the game from here. 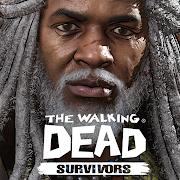