Pre-screened with a concept study in 2015 Hyundai santa cruz it finally becomes reality. The Korean brand shared the hint images of Santa Cruz, the pickup model it prepared for the North American market. April 15, 2021He pointed to.

The 2021 Santa Cruz has a monolithic structure, as the Korean manufacturer stated earlier. It is similar to the concept version in terms of its general structure, but when it comes to details, there is a lot of difference between the two designs. For example, the reversing doors in the concept have not been moved to the production version. We see that the vehicle in the tip image has a double cabin. This made Santa Cruz’s case a little short.

New Isuzu D-MAX went on sale in Turkey: Here are the price and features

Hyundai’s new pickup model bears traces of the new Tucson, which is planned to be available in our country soon. Especially the louvre that dominates the front section and the lighting that looks like a part of it reminds us directly of Tucson. On the other hand, the sporty design and sharp lines that continue up to the B pillar are again similar to the two models. At the rear of the Santa Cruz, hammer-like stoplights and a large Santa Cruz script draw attention.

The technical details of the 2021 Hyundai Santa Cruz are not yet clear. However, in the statement made by the company, it was underlined that the pickup will have “powerful and efficient engine options”. In addition, it is among the information that the vehicle will have a four-wheel drive system and will be presented with new generation connection technologies. The new Santa Cruz will be produced at the Montgomery facilities in Alabama from next summer. 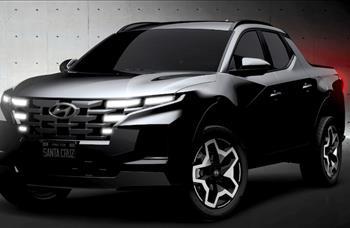