The German brand, which recently unveiled its new electric SUV model ID.6, within the scope of the 2021 Shanghai Motor Show, is now Volkswagen Polo faceliftposted a tip about the image.

According to the sharing made, 2021 Volkswagen Polo with make-up, Thursday, April 22 The day will be shown to the world with a digital event. The said event will be held at 12:00 hours with Turkey. Returning to the teaser image shared by the company, we can say that Polo has a drawing image that gives clues about the renewed front section and lighting.

See Also. “The new Audi A6 e-tron concept can project images on the wall with its headlights”

The facelifted Polo’s headlights seem a bit thinner compared to the current case. In addition, the design of the LED daytime running lights in the lower section has also changed. On the other hand, we see that these two lighting are connected with the LED strip that extends to the logo. In addition, the blinds in the upper part also seem to be a little thinner. It is not included in the image, but we will see a change in the center air intake and fog lights in the bumper.

Another important change in the facelifted Volkswagen Polo will be made on the side of the rear taillights. In this context, we can expect the renewed stops to extend towards the logo as in Golf 8. In fact, this change can be noticed in prototypes in spy photos, although the German brand has tried to hide this detail. In addition, we can expect the interior of the make-up Polo to be digitalized and to have new technologies.

We expect to see updates in the engine range of the compact model as well. For example, within the scope of the tightening emission rules, the electric support in the three-cylinder turbo gasoline engine will take its place in the Polo. 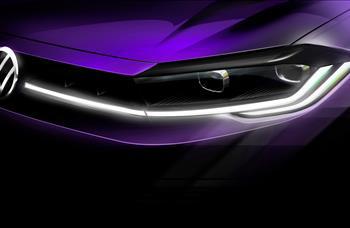